I have always been inspired by this quotation, and in this assembly I’m going to talk to you about its source and what it can teach us. The words were spoken by John Lewis – not the famous British retailer, but John Robert Lewis, born February 21st 1940 in Troy, Alabama. Lewis grew up in a black neighbourhood in the southern United States – he had only seen two white people by the time he reached the age of six. He described what it was like growing up: 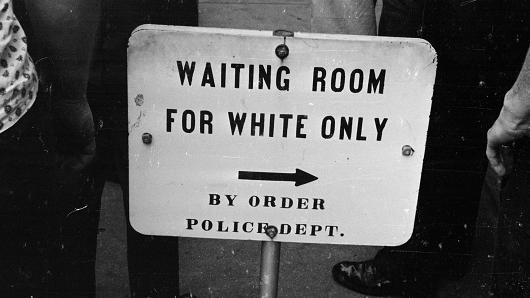 A police sign for a ‘white only’ waiting room at the bus station in Jackson, Mississippi, 1961 (source)

“I saw racial discrimination as a young child. I saw those signs that said ‘White Men, Colored Men, White Women, Colored Women’. … I remember as a young child with some of my brothers and sisters and first cousins going down to the public library trying to get library cards, trying to check some books out, and we were told by the librarian that the library was for whites only and not for ‘coloreds’.”

Lewis was 20 in 1960 when the Supreme Court in the United States ruled the case of Boynton vs Virginia that the law which forced blacks and whites to sit separately on public transport was unconstitutional. The law was changed, and public transport became legally integrated. However, although it was now legal for blacks and whites to sit together on buses, and illegal for there to be segregated waiting rooms, in large parts of the southern United States the law was not enforced. John Lewis was one of thirteen original Freedom Riders who set out to challenge the Federal government to enforce the law.

The planned route of the Freedom Ride

The plan was simple. A group of white and black men and women boarded a bus together in Washington DC and set off on a journey through the deep south to New Orleans. They intended to travel on the bus together, to challenge the racist attitudes of southerners who thought that blacks and whites should remain segregated, and to force the police to uphold the law. 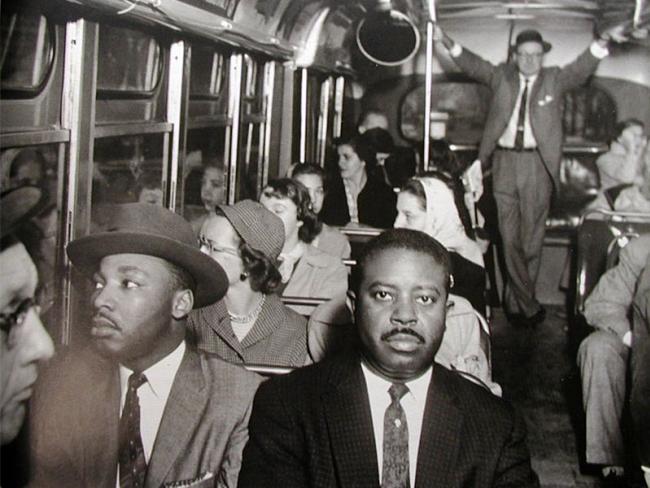 Freedom Riders on the bus

The journey started well. Spirits were high, and together the Freedom Riders agreed on their key principles of non-violence. Theirs was to be a peaceful process. However, some of the white people in the south were angry at this display of integration – very angry indeed. And they had not taken a pledge of non-violence.

John Lewis and Jim Zwerg after being assaulted in Montgomery, Alabama, 1961

Lewis was the first to be assaulted, as he left a waiting room in Montgomery, Alabama in the company of his white friend Jim Zwerg. And worse was to come. The police commissioner in Birmingham, Alabama was a supporter of the white supremacist group the Ku Klux Klan, and assured the Klan leader that the police would allow them to attack the Freedom Riders without fear of arrest. The initial attack happened in Anniston, Alabama, as the bus was hit with stones and had its tyres slashed. The driver tried to get away, but the crippled bus came to a stop, and the Klan threw firebombs inside. Then they held the doors shut, intending to burn the occupants alive. The police stood by and watched.

Either an exploding fuel tank, or a shot from a highway patrolman, forced the Klansmen to retreat, and the Riders escaped from the bus. After hospital treatment, the Freedom Riders continued their journey, being assaulted, attacked and injured again and again. And they did not retaliate, sticking to their principles of non-violence to make their point.  As Lewis said, “if not us, then who? if not now, then when?”

Lewis went on campaigning for civil rights. In 1963 he was elected chairman of the Student Non-violent Coordinating Committee (SNCC), and was the youngest speaker at the meeting in Washington where Martin Luther King gave his famous “I have a dream” speech. He is the only remaining speaker from that meeting still alive today. He was elected to the House of Representatives as Congressman for Georgia’s 5th District in 1986 and has been re-elected fourteen times, only dropping below 70% of the vote once in all that time. If not me, then who? If not now, then when?

In 2008, Lewis endorsed Barack Obama’s campaign for the Presidency of the United States. In the run-up to the election, he said this:

When we were organizing voter-registration drives, going on the Freedom Rides, sitting in, coming here to Washington for the first time, getting arrested, going to jail, being beaten, I never thought — I never dreamed — of the possibility that an African American would one day be elected President of the United States. My mother lived to see me elected to the Congress, but I wish my mother and father both were around. They would be so happy and so proud, and they would be so gratified. And they would be saying that the struggle, and what we did and tried to do, was worth it.

At Obama’s inauguration, John Lewis was sat right there on the stage. And afterwards, President Obama presented him with a commemorative photograph, signed, with a simple message: “Because of you, John.”

Obama presented Lewis with the Presidential Medal of Freedom in 2010

In 2013, John Lewis returned to Montgomery, Alabama where he had been beaten 52 years earlier for using a legally integrated waiting room with his friend. Kevin Murphy, the current chief of police, met him at a church, and handed over his badge out of respect, apologising for the way in which his police force had failed to protect him from violence in 1961.

What John Lewis said has always inspired me, but when I found out the story behind his words, I was overwhelmed. “If not us, then who?” led directly to “Because of you, John.” Lewis saw something that needed to change, and he did something about it. The world we live in today is different, better, because of him and people like him who did not stand by, but who stood up and were counted. Events like last week’s shooting in Charleston, South Carolina show why his kind of non-violent action is still needed today to change attitudes that would seek to divide, rather than unite.

What do you want to change? And what can you do about it?

At Chew Valley School in 2012, a group of students decided that they wanted to change the way in which homophobic language was used thoughtlessly and irresponsibly in our community. Rather than moan about it, or be frustrated by it, they did something about it. They formed the Equalities Team and conducted a campaign to educate, inform, and change attitudes.

It’s due to their work that we share a more tolerant, thoughtful and welcoming school. They saw something that they wanted to change and thought “If not us, then who? If not now, then when?” Ofsted recognised this – in their recent report they said:

“The school’s Equality Team, led and run by student leaders, provides opportunities for students to mix in socially diverse groups.Consequently, students demonstrate high levels of respect for each other and are extremely welcoming of difference. Discrimination of any kind and the use of derogatory language are not tolerated.”

At Chew Valley School to talk to staff and students about gay issues. I learned about exceptional work they have done to eradicate bullying.

What will you change?

View the Prezi for this assembly here.