This week I’ve been reading through my List in Pocket (the single most useful app I have installed) of all the blogs, articles, links and clips I’d seen during the last term but not had the time to consume and digest. In my trawl through I found this excellent paper from the states:

In a nutshell, the answer is “yes.” Or, as Mark McCourt (the wonderful @EMathsUK on Twitter) put it:

@chrishildrew in other news, bear shits in wood.

Yes, in the summary of the research Kini and Podolsky clarify the following:

Our research does not indicate that the passage of time will make all teachers better or incompetent teachers effective. However, it does indicate that, for most teachers, experience increases effectiveness. (Kini and Podolsky, 2016)

This isn’t news, surely? Yet my tweet about this study attracted a number of replies discussing examples of schools undervaluing experienced staff and the “cult of youth” which sees some schools placing too much emphasis on new career entrants with “fresh ideas” and “energy.” I know that schools benefit massively from trainees, NQTs and RQTs, with all those fresh ideas and energy – that isn’t what this blog is about. What it’s about instead is the value that experienced staff bring to a school and why we should value them, listen to them, and above all retain them in the profession.

I can remember being an NQT and looking in awe at those with ten, fifteen or twenty years experience. Their command of the room, their command of their material, and their command of their craft was inspiring. I’m no fool: I watched and learned, hungry for the secrets of success that, in my first faltering forays into the classroom, I sadly lacked. And, although I am now entering the 20th year of my teaching career myself, I’ve never stopped.

I was only in my sixth year of teaching when I became a Head of Department. It was too soon. In time, I got better, but I can remember some cringeworthy naïve mistakes that I made in my first year or so. In particular, challenging an experienced member of staff about underperformance. I was well-supported by the Headteacher, carefully briefed, and it needed to be done, but I know I made an unremitting hash of that conversation. I simply didn’t have the experience to carry it off properly, to do it justice, to be fair to that colleague. It was embarrassing. Those conversations are never easy, but with a few more years under my belt I know I would have handled it better. I made a conscious decision to wait for my next promotion until I was experienced enough to be ready – I did eight years as Head of Faculty before applying for SLT positions.

Throughout that time, I’ve been watching and learning from colleagues more experienced than me. I’ve watched them teach, and picked up as many of the tips and tricks that they’ve learned as I can. As an aspiring Headteacher, I visited and spoke to as many experienced Heads as I could to learn from them. I’ve read everything Tom Sherrington and John Tomsett have ever posted, and read books by John, Vic Goddard and others, for the same reason. But the fact is, you only really get better at doing this job – teaching, or Headteaching – by actually doing it.

I’ve learned an awful lot in the first seven months of Headship, and had many of my ideas confirmed. One of the latter is the value of experienced staff to the school as a whole. Those teachers who have been at the school for years and seen Heads and Secretaries of State come and go (ideally fewer of the former than the latter), who are teaching the children of the children they taught earlier in their career, who have seen trends and fads rise and fall and carried on regardless. These are the ones you need – who make the school what it is. John Tomsett wrote about this in his interview with his longest serving teacher back in 2013. It is these staff who provide the skeleton of the school: the backbone, rib cage and skull that hold it all together and keep it safe. And I had this personally confirmed to me at the end of term when Chris George retired.

Chris has taught at Churchill for 22 years, the majority of those as Head of Sixth Form. When I first started, I spent a fascinating hour with him getting under the skin of the school over that time. Before he retired, we spent another hour where he generously told me exactly what he thought I needed to hear after my first seven months. Both conversations were invaluable. And his leaving speech, delivered in the sunshine on the last day of term after the staff barbecue, was one for the ages. He talked about what experience had taught him over his career, and passed it on to all of us. Most importantly, his speech was based around the advice he was given as an NQT himself, by his experienced mentor. Advice that had stayed with him throughout his career. “Treat people like people” was one of those nuggets – and I’ve made that a motto for my own Headship. “Chris Hildrew, coming in here with his new-fangled ideas!” said Chris – a dig I definitely enjoyed! He also advised us to look after our mental health, to seek help if we needed it, and not to try and pretend that everything was okay if it isn’t. This is advice that needs to be heard in staff rooms up and down the country. He also advised teachers to always carry a piece of paper with them when walking around the site, because it made it look like you were doing something important and stopped people bothering you.

He finished with the words of Norman Stanley Fletcher: 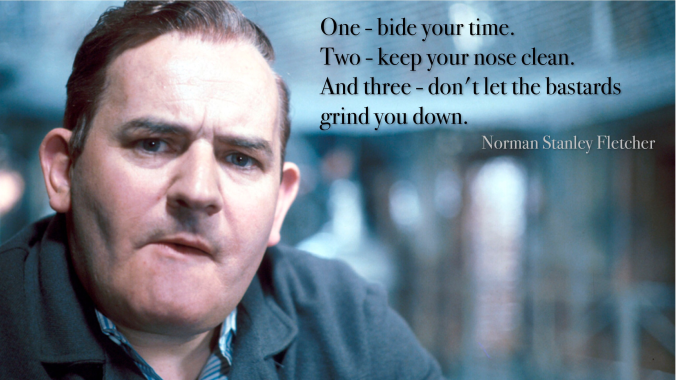 It is vital to our profession that we create those supportive and collegial environments, cherish the teachers who have the experience, and listen – really listen – to them. We have much to learn. Because we’ve recruited fantastic teachers to replace our leavers this year. But it’ll take 22 years before they’re as good as Chris George. And there are no short cuts.

9 thoughts on “The benefit of experience”